Area 51: An Uncensored History of America’s Top Secret Military Base by Annie Jacobsen 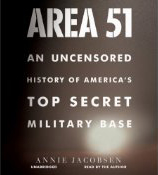 Area 51: An Uncensored History of America’s Top Secret Military Base by Annie Jacobsen


I know what you are thinking – another book about UFOs and aliens.  Although this book does cover the crash at Roswell, there are no aliens there. Most of this book is really about the clandestine activities of the CIA and Military; including the nuclear testing, our use of Nazi scientists, and our spy planes (U2, Oxcart/SR-71 Blackbird, etc).


Most of the book’s claims are preceded by ” Declassified in …”  Whether they are legit or not, I have no way of telling. Most of the detailed history in this book takes place before 1968 mainly due to the previously classified nature of the material.


The author did a good job of turning what could have been a dry history into an interesting story by making characters of the historical figures. I liked how she did not linger too long on any one area of the history.


This book seemed very believable up until the end, when she dove more into the Roswell incident. The author had almost of no real citation other than an unnamed source. The unnamed source said that the UFO was Russian-made and piloted by genetically and surgically malformed children with the help of Joesph Mengele. He also claimed that is was all a plot by the Soviet Union to spook us into thing that aliens where invading so they could use it as a cover to attack us. It was disappointing that the author waited until the end to spring this nasty surprise on the reader.


The only part of this book that was worse than the spoiler mentioned above is the narration. It is read by the author. While most of the time I find this great, this was time is was 15 hours of torture. Her reading was in the very 80s style of narration, when there was no inflection or character performance. It it was worst narration I have the “pleasure” of listening to in a very long time.


My next book will be Sellevision by Augusten Burroughs