The Dragon Factory by Jonathan Maberry 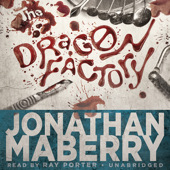 The Dragon Factory by Jonathan Maberry is the second book in the Joe Ledger trilogy. Unlike the frist book, there are no zombies. Yes, I know, I was disappointed too.


This trilogy revolves around Joe Ledger, an agent for the top-secret Department of Military Science (DMS). On a mission to stop threats to the US and the world, at the heart of the DMS is man that goes by many names and his super computer, Mindreader.


First off let me say this book is not going to win a Phillip K. Dick award or  Nebula award. It Is a modern day pulp chalked full of violence, sex and pseudoscience. That said, it really was not a bad book. Though there wasn’t a lot of depth, it was a very enjoyable read.


The big threat this time is white supremacist geneticist with a mysterious past who is planning to wipe out everyone that is not white using weaponized genetic diseases that are targeted to ethnic groups.


The biggest problem with the book is that every chapter has the time stamp until the killer virus is released. The reason this becomes a problem is during the fight scenes chapters can be only a few sentences. While this may not be a problem in the print version, it is annoying in the audiobook.


Ray Porter narrated this book. It was an adequate performance, but did not really add anything to the book. The only place the narration really suffered was in the Russian accents.


You can get this book at Amazon and Audible.

Sorry About the delay on a Visit from the Goon Squad by Jennifer Egan is is still coming.